After the Tamil film Ratasan, now there are reports of actor Akshay Kumar doing another remake. It is being told that Akshay has signed the remake of the Tamil film Soorarai Pottru.

The original film Simplify, which was released in the year 2020, was inspired by the life of GR Gopinath, the founder of Deccan (formerly Deccan Air). 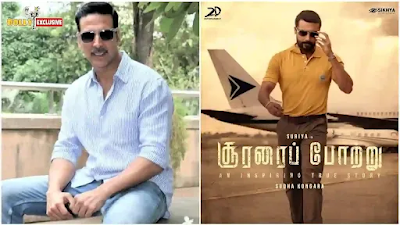 Tamil actor Suriya was in the lead role in this film directed by Sudha Kongara. According to sources related to the film, the makers of the film were in touch with Akshay for the last six months.

Last year, Akshay had given verbal approval for the film. Recently he has signed this film. Akshay liked the way the script of the remake film has been adapted to the backdrop of North India.

Born in Hassan, Karnataka, GR Gopinath traveled from a common man to a successful businessman with the help of relatives and friends of his own free will. After retiring from the army, he founded an airline company called Air Deccan in the year 2003. Apart from this, Akshay’s upcoming film Bachchan Pandey will be released on March 18.