Bhura, the protagonist of the short film Biscuits, hails from a backward class and devises a mysterious strategy to take revenge on his upper-caste boss and leader through ordinary biscuits.

It has been shown in the biscuit that how mysteriously democracy works and how the vote of the common man is changed and the most powerful weapon of change is. 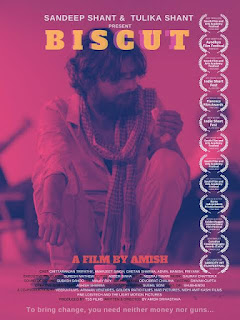 This short film has been released on Gorilla Shorts’ YouTube channel and is part of their already ongoing Offbeat Season 1 series. Other Gorilla Shorts films like Station Master Phool Kumar and Chaddhi have already become popular.

Amish Srivastava, who lives in the state of Virginia, has directed Biscuit Ka. He has also written the screenplay of the film. Amish studied screenplaying at UCLA Extension University, USA and studied film direction in New York.

Producer Sandeep Shant is the CEO of Detroit-based TSS Films and grew up in Balrampur, Uttar Pradesh. That’s why he has not shot the film on any set, but in the village.

Dozens of villagers of Surat Singh Deh village of Balrampur have worked in the film. This makes the film feel real.

Chittaranjan Tripathi, who came into the limelight with the Netflix series Sacred Games, is in the role of Navratan Singh, the Dabang Sarpanch of the village. Amarjit Singh is in the role of Dalit Bhura, he was seen in web series Mizarpur and Patal Lok.

Akanksha Singh will be seen in Rangbaaz