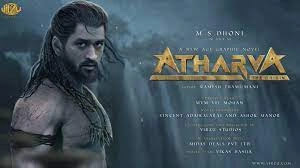 Mahendra Singh Dhoni, the great cricketer of this century and former Indian captain, is now seen in a different style, that is, now Mahendra Singh Dhoni is going to start a new inning of his life after retiring from cricket, MS Dhoni is now going to make a new explosion in the whole world through digital platforms i.e. have shared the first look of their new graphic novel ‘Atharva: The Origin’.

In this series, MS Dhoni will be seen in a completely new style from cricket look, fans of MS Dhoni are very excited to see this new avatar, the first look of this graphic novel Atharva has been shared by MS Dhoni through his social media.

In this video, MS Dhoni is seen as an animated superhero and a warrior, let us tell you that ‘Atharva: The Origin’ is a new age graphic novel, and this graphic novel is based on the story of Ramesh Thamilmani,

Which is based on mythological science fiction, which tells about the journey of a mysterious Aghori, through this series an attempt has been made to break the big myth going on in the society.

Along with this, this web series is being produced by Dhoni Entertainment, which is produced by Adikalraj and Ashok Manor.

Atharva: The Origin is an adaptation of Ramesh Thamilmani’s book.