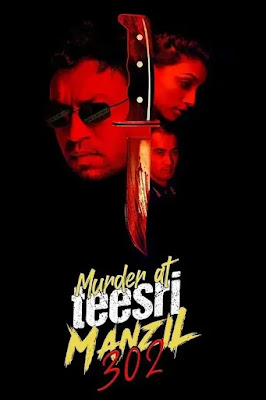 Late actor Irfan Khan‘s film ‘Murder at Teesri Manzil 302’ has been released on Zee5 after 14 years. Seeing Irfan Khan on screen after 20 months will bring comfort to the audience. Navneet Baz Saini has directed this film.

The story of this thriller film is of a businessman whose wife goes missing. The character of a businessman in the film is played by Ranvir Shorey. The responsibility of finding the wife of Abhishek (Ranveer Shorey) is entrusted to Tejinder Singh (Lucky Ali).

There are many twists and turns in this crime thriller film, from which the audience speculates that Maya has been kidnapped or murdered or is part of a bigger conspiracy. In the film, Irfan is playing the role of Shekhar aka Chand, who is related to this conspiracy in some way or the other.

The script in this film is weak but still keeps the audience hooked. The film opens layer by layer. The characters are not well written in the script. Apart from this, the jokes made by the cop in the film seem redundant and express disappointment on the screen.

You will like Irfan Khan’s one-liner in the film. He has shown his character well. However, Deepal’s romance with Irfan doesn’t seem so effective. There are many flaws while writing the character of Deepal. Sometimes his acting is over. Lucky Ali neither looks funny nor does he look like a policeman.

The cinematography by Ravi Walia covering the locations of Thailand is gorgeous. You will not remember the songs of the film. This is a 126-minute film that has not been dragged unnecessarily.

‘Murder at Teesri Manzil 302’ makes you delve into the memories of Irfan Khan but it is not a film that you would like to remember. You can watch movies like ‘The Lunchbox’, ‘Piku’, ‘Maqbool’ instead.

You will be surprised to know that this film took 14 years to release. If you are also a fan of Irfan Khan, then once again you can see his acting in this film. Irfan Khan’s performance was really commendable.

He made many people crazy about his performance. He used to do serious roles but the characters played by him were so strong that they went straight to the heart.

Then the story is changing in every scene, like in the films of Abbas Mustan, you feel that every face is sitting with another face on its face, you do not understand who will turn out to be the main villain tomorrow.

Obviously, the film sometimes loses its grip on the audience due to adding more twists and turns, but it is certain that if it had been released 14 years ago, it would have been liked a lot.

Because that was Deepal Shaw’s short-term phase, Ranveer Shorey and Irfan Khan are also looking quite young. It is clear that neither the producer has been skimpy in spending money, nor has the director tried all the formulas.

The only thing this film proves is that no matter how shallow you make a film, Irfan Khan will elevate it as soon as he enters the screen, no matter what. A vocal character who changes pace every 15 minutes and without justification. Khan deserved much better.

The trailer of this film has been shared by ZEE 5 on its social media handle. Seeing the trailer of the movie looks very old, it will be very difficult to identify Irfan Khan in this movie because this film was made 14 years ago.

Murder At Teesri Manzil 302 is directed by Navneet Baz Saini. Lucky Ali and Ranvir Shorey are also in important roles in this film. Here is the movie trailer: